In this section, we will discuss how baking works. The different actors of the mechanism and the technological solutions will be presented.

Two types of actors are involved in the block creation process:

Roles of a delegate​

Baking is the act of creating, signing and publishing blocks.

Bakers select and validate all transactions and add them to the blockchain. If a baker behaves dishonestly, the protocol has a built-in mechanism that can cause them to lose their security deposit.

Bakers are rewarded with Tez for securing the network.

Bakers are randomly selected from the list of all nodes that have declared themselves as delegates, in proportion to the amount of Tez they have.

A baker is a delegate, while a coin holder who delegates their Tez is a delegator. Note that a baker does not necessarily need delegators to function, they can play solo, but they have fewer chances to be selected for baking.

The selected baker is allowed to create the next block and add it to the chain then communicate it to the network. They receives a certain number of Tez as a reward.

To create a block, a baker has to freeze part of their tokens, which will be made available back to them only PRESERVED_CYCLES = 5 cycles later.

A baker can be marked as either active or passive. A passive delegate cannot be selected for baking or endorsing. A baker becomes passive in cycle n if they fail to create any block or endorsement in the past PRESERVED_CYCLES cycles, that is to say, in cycles n-1, n-2, …, n - PRESERVED_CYCLES.

To approve a block at level n, the endorsers each add a signature operation that is included in the n + 1 level block. Once the block n + 1 is baked, no more endorsement operations are accepted for block n.

There are also accusers. This type of delegates monitor that:

If an accusation is correct, the accuser gets a part of the funds that were frozen by the baker or the endorser, as a reward. The remaining part is burned.

Any attempt to fraud is therefore punished.

Cryptocurrency tokens or coins are burned when they are permanently removed from the circulating supply on purpose.

The Tezos consensus is organized in cycles. One cycle corresponds to BLOCKS_PER_CYLCE = 8192 blocks (≈ 2.8 days). At any point, the shell will not implicitly accept a branch (chain of blocks) which fork point is in a cycle more than PRESERVED_CYCLES = 5 cycles in the past (≈ 14 days).

At each cycle, a random seed is created. A pseudo-random number generator uses the seed to generate the priority list based on a stake snapshot 2 cycles ago.

Snapshots of delegates' stakes are done every 512 blocks and define who can bake. The probability to sample a particular delegate is its stake in the snapshot over the total stake in that snapshot.

A stake snapshots represents the stake distribution for a given block. Stake snapshots are taken every BLOCKS_PER_STAKE_SNAPSHOT = 512 levels.

Since Tezos runs a deterministic protocol, there is no real randomness. More specifically, there is no randomness in the snapshot selection and baking/endorsement slots attribution, i.e., we know the result before the operation occurs (unlike in PoW where you can only estimate it).

The seed is created by requesting a secret number (nonce) from all delegates. All secret numbers are gathered and used to create a hash that will be used as the random seed. Since the last owner to reveal their secret already knows the other numbers, a 2-phase process called "Commit & Reveal" is necessary.

The random seed for cycle n is a 256-bit number generated at the very end of cycle n-1 from the previous seed and the nonces that delegates commit during cycle n-2.

In cryptography, a nonce (number used once) is an arbitrary number intended to be used only once.
A commitment is the hash of a nonce.

In summary, the seed for cycle n is a hash created from:

This seed is used to randomly select:

A round robin is a way of choosing all elements in a group equally in some rational order, usually from the top to the bottom of a list and then starting again at the top of the list and so on.

The minimum time delay between two blocks is 30 seconds, reached if the baker is of priority 0 and has gathered at least 66.7% of the endorsements. If the priority 0 baker fails to bake, the priority 1 baker may then bake after a certain time, defined by a so-called round duration function. To be able to bake as rapidly as possible, the baker must gain enough endorsements (66.7%, that is, endrosements with endrosing power of at least 4,667 out of 7,000). Rounds follow the structure below:

Any block baked ahead of the minimum time delay is automatically rejected under the protocol's rules.

Remote signing software is one way to reduce the exposure of private keys during baking operations.

Remote signing involves physically separating baking/endorsement requests originating from the network and intended for a given delegate, from that delegate's signing operation. The Octez client implements several built-in signing mechanisms (unix, tcp, http, and https) that use different communication channels to send signing requests for the baker.

The following events occur during a remote signing operation:

The key should preferably be held in a hardware vault so it is never directly accessible on the network. Moreover, it is more secure to ensure that the hardware vault authorizes only block signing rather than the signing of just any transaction (i.e. such as not to create a blind signing mechanism). For example: Ledger Nano S together with Kiln meets these two conditions.

By abuse of language, we often designate by bakers: the bakers and the endorsers. Because in practice, they are the same entities that carry out the operations of creation and validation of blocks. Of course, a baker cannot also be an endorser for the same block. Otherwise, they would validate their own block. However, when there is no elected baker for a cycle, they can validate the blocks of other bakers. 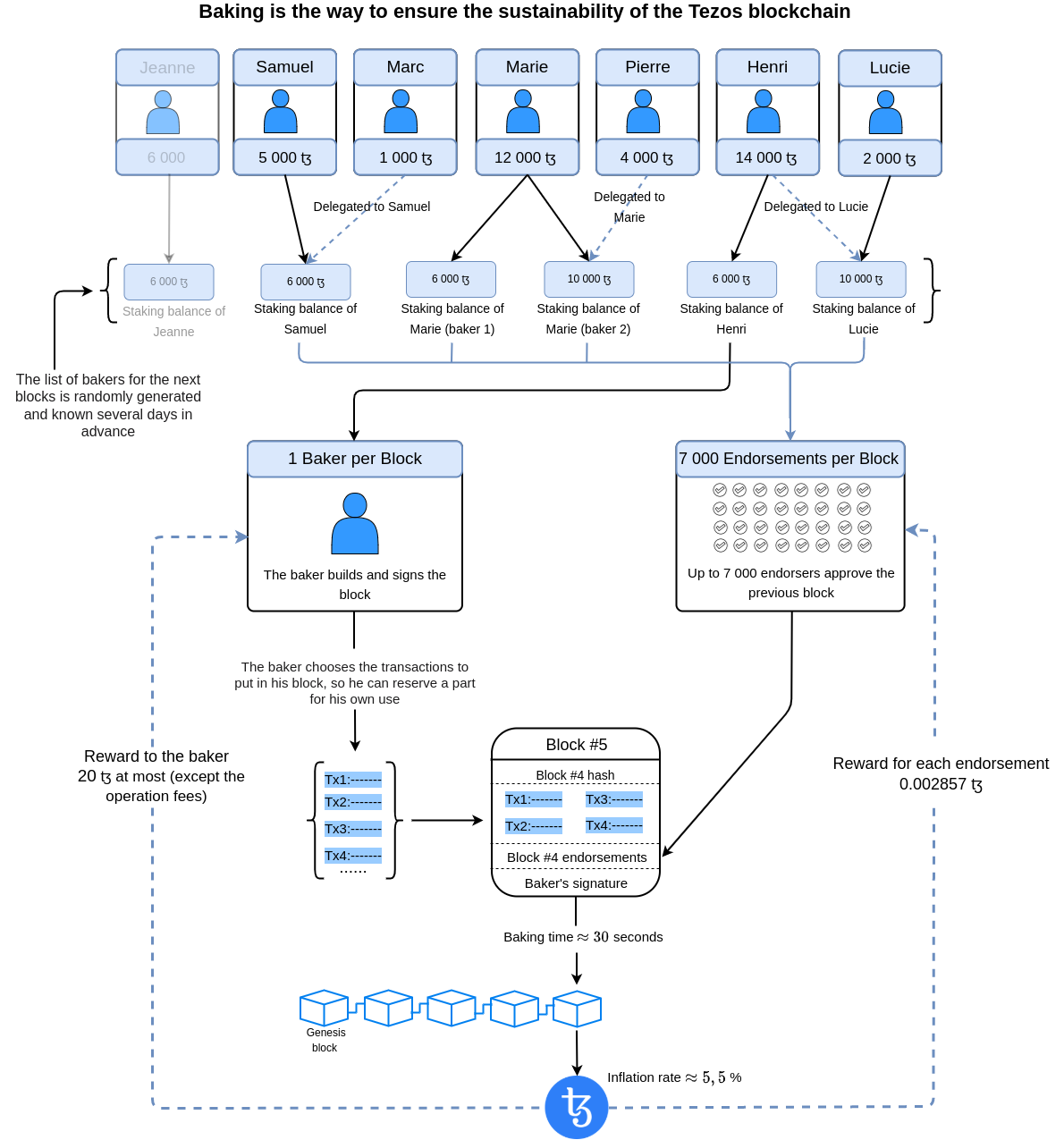 The Tezos consensus protocol uses the Liquid Proof of Stake algorithm. Delegates (people who have at least 6,000 ꜩ of delegated funds) are given the responsibility of creating and endorsing blocks. They are rewarded for their action. They are also required to lock a portion of their capital as a security deposit to ensure honest behavior.